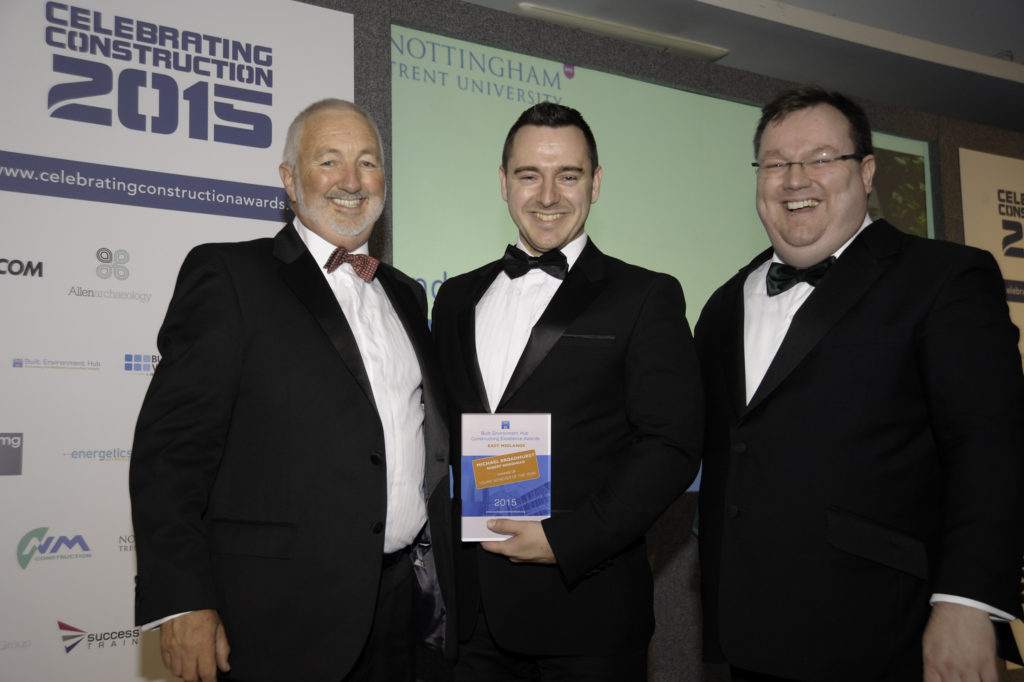 Woodhead Living Project Coordinator, Michael Broadhurst, is celebrating this week after scooping the title of Young Achiever of the Year at this year’s Constructing Excellence Awards.

The 26-year-old has been working for construction company, Robert Woodhead Ltd, since he joined the firm for a year’s placement as part of his university degree.

“I haven’t looked back since Woodhead gave me that first opportunity,” said Michael, of Stenson Fields in Derby. “After securing my year’s placement with the company during my building surveying degree at Sheffield Hallam, I progressed well and Woodhead gave me the opportunity to come to work with the team four days a week, while completing the remainder of my degree course.

“Ever since starting I’ve been supported tremendously, not just by the Living team I work in, but by the company as a whole, both financially and through the positive culture which comes part and parcel with the organisation.

“I’m loving the projects I’m working on, both in Lincolnshire and Derbyshire at the minute, and am keen to further develop through my training with Woodhead, as I’m currently training towards Chartered status with the Royal Institute of Chartered Surveyors (RICS).”

He has since begun work on 20 new bungalows for the City of Lincoln Council’s Birchwood scheme, as well as 22 new homes for South Derbyshire District Council. Michael was also responsible for the Code for Sustainable Homes (CfSH) assessments on the multi award winning Cross Street Scheme. Michael gained his CfSH assessor qualification through Woodhead.

“There’s always something new and interesting when working in construction,” Michael added. “I’ve always wanted to work in the construction industry. My role is very diverse, which adds to the enjoyment, as I work on both quantity surveying and project management, working closely with both the client and the operatives on site.”

“Michael has come such a long way in a short space of time and been a real asset to our business since he began with us in 2011. He’s very deserving of this award and I hope his achievements go on to inspire other young people to make a move into the construction industry.”