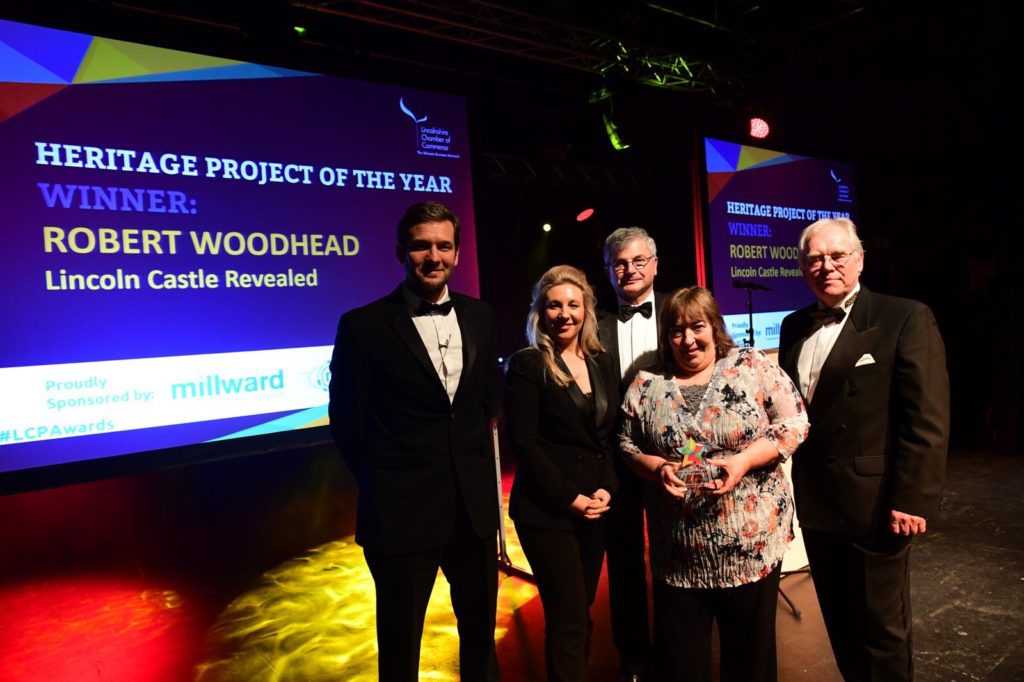 Robert Woodhead Ltd was in the spotlight at last night’s Lincolnshire Construction and Property Awards 2017, taking home the title of Heritage Project of the Year!

Held for the first time this year by the Lincolnshire Chamber of Commerce, the awards, which took place at the University of Lincoln’s Engine Shed, have been launched to ‘champion the county’s leading construction and property businesses, and the dedicated people who work hard behind the scenes.’

The Heritage Project of the Year Award was handed to Woodhead Heritage for its work to restore Lincoln Castle.

The Woodhead Heritage team was nominated for its delivery of the £19.1m  Lincoln Castle Revealed project, which has seen the historical city’s Castle and its walls restored, as well as creating a dedicated vault and visitor experience for Magna Carta, completed ready for the 800th Anniversary of Magna Carta.

Not without its challenges, the project unearthed a late Saxon Sarcophagus, which was successfully excavated in the middle of works. Woodhead and Lincolnshire County Council also worked alongside Natural England to find somewhere to accommodate a rare breed of bat, which had been nesting within the Castle walls. Opened by Princess Anne in 2015, the historical attraction saw visitor numbers soar following its restoration.

Juliet Slater, Team Leader for Woodhead’s dedicated Lincoln team, said: “We’re delighted to be a part of the first year of these awards and to walk away winners in the Heritage category.

“We have been working on projects across Lincolnshire for many years. In fact so much of our workload now comes from the local area, we have a base in the city, which was set up on Grantham Street in the heart of Lincoln over two years ago. With every project we work on, we aim to source materials and labour from as close to the site as possible. I hope our work across the county has helped in some way to drive and support the local economy.”

Woodhead’s work to enable the delivery of a public sector hub for Lincoln was also praised with two ‘Highly Commended’ certificates from the judges. The project to bring the City of Lincoln Council’s services and Lincolnshire Credit Union under the same roof as the DWP’s Jobcentre Plus, was the biggest national relocation ever for the DWP which was procured through the EMPA Minor Works Framework.