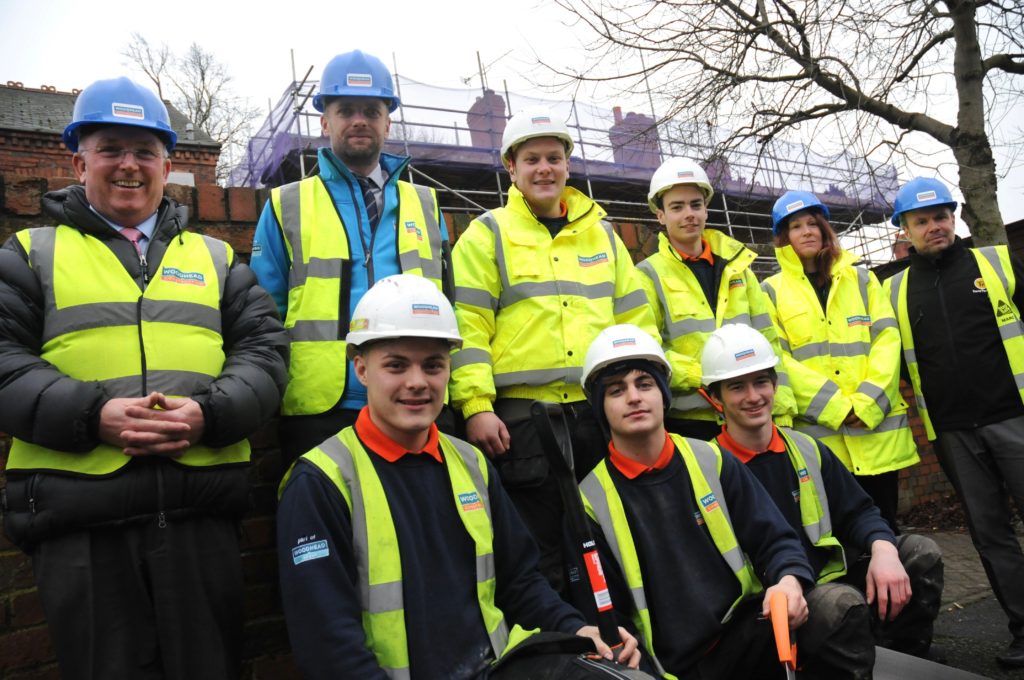 A team of apprentices working on the £10m New Bolsover Model Village housing improvement programme have been given a range of brand new tools from local builders merchants, Travis Perkins.

The apprentices, who all started their apprenticeships last year with Robert Woodhead Ltd, are currently working on the two and half year programme of works at New Bolsover. They joined members of the project team as they accepted the tools from Travis Perkins’ Key Account Manager, Marc Holmes.

Each apprentice has received tools specific to their apprenticeship:

Marc said: “We’re delighted to support the apprentices as they start out in their careers with Robert Woodhead Ltd. We’ve worked with Bolsover District Council and Woodhead many times before, and are very pleased to be providing our services to this exciting project.”

Matt Stone, Woodhead’s Quantity Surveyor for the New Bolsover Model Village programme, said: “We are working very closely with Travis Perkins on this project, as they have a base just around the corner and we try to source as many of our materials as locally as we can.

“We’re very grateful to them for their generous donation. The brand new tools were a real boost for the apprentices and they’re really looking forward to using them as their training progresses.”

Over the course of the two-and half-year programme of works at the Model Village, Woodhead will carry out essential repairs and restore architectural features, including the windows and doors, of the 194 Grade II listed properties. The project, which began in October 2016 and is expected to complete in the Spring of 2019, is being funded by Bolsover District Council with part funding for Conservation works being funded thanks to Heritage Lottery Funding. The project was procured through an EEM Ltd Framework, which aims to bring efficiency savings for its public sector members.

The Bolsover District Council project is dedicated to delivering high quality housing and creating a thriving community with high aspirations. For more information, have a look at the scheme’s first video: