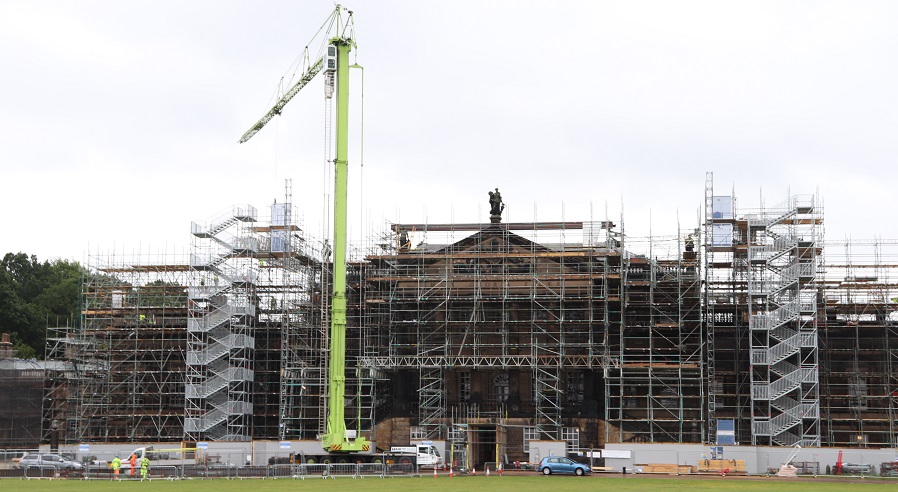 A major milestone has been reached in the restoration of South Yorkshire’s Grade I listed Wentworth Woodhouse. The team are putting the finishing touches to the huge scaffolding system that will enable extraordinary public access to one of the biggest conservation projects of a generation.

Here are the incredible numbers behind the scaffolding:

700 tonnes of scaffolding will be used and within the region of 6,000 scaffolding planks now encase the stately home.

50,000 linear metres of scaffolding poles have been used. Laid end to end vertically they would be 5.5 times taller than Mount Everest.

Contractors Woodhead Group will work on 1,500m2 of the building’s roof, the same area as about six tennis courts!

Approximately 65 tonnes of new Westmorland Green Slates will be used. Sourced from the same area as the original supply – Cumbria in the Lake District. Slate that is in good condition is being salvaged for reuse on other areas of the roof at Wentworth Woodhouse and for future repairs.

At the peak of the works, up to 30 tradespeople will be working on-site every day.

The scaffolding reaches a height of 30 metres – as high as six double decker buses – with the public walkway reaching heights of 18 metres.

The public will climb 135 steps on the way up and 135 on the way down, the scaffolding also has two specialist, accessible lifts.

There are four main sections of the public walkways each spanning 22 metres. These were assembled at ground level and craned into position.

The crane used was a Spierings SK1262-AT6, this is a self-erecting mobile tower crane with a 60m reach and 67 metres tall – just shy of the wingspan of a Boeing 747 jumbo jet!

Six core structural steel beams will support the temporary roof, each beam weighs in at 9.3 tonnes, about two-and-a-half times as heavy as a hippopotamus.

In total, 19 urns have been removed from the roof for conservation. Each urn weighs approximately 600kg, which is roughly the weight of an adult polar bear!