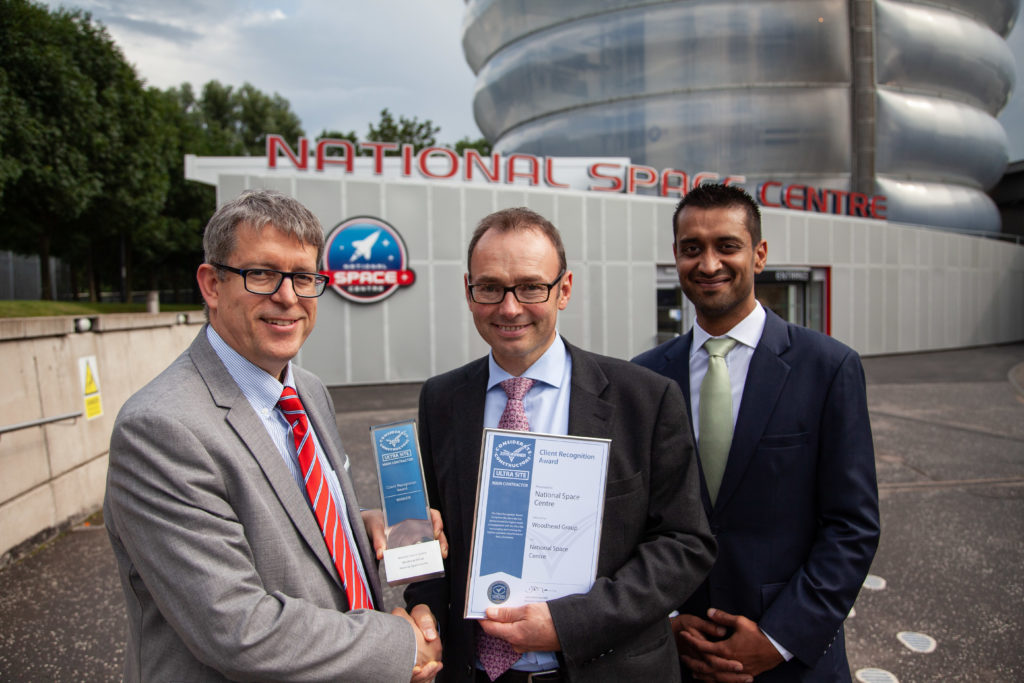 Woodhead Group has continued its success on the Considerate Constructors Scheme (CCS) with a pair of wins for its work at the National Space Centre.

The company received an award for its community engagement during the Launch Pad project, and also nominated the Centre itself for their commitment to supporting initiatives, which resulted in a record-breaking score of 48/50.

This project was procured through the Scape Venture framework, which enables rapid and efficient delivery, as well as creating a series of benefits for the local economy. It was the first ever construction project under one year in duration to be registered as a Considerate Constructors Scheme Ultra Site.

Ultra Sites were introduced by the Considerate Constructors Scheme in 2017 and represent the highest level of attainment within the scheme.

Mark Maisey, who led the project from the Woodhead Group commented “The National Space Centre remained open whilst we were delivering on a live site, so we wanted to push the boundaries of considerate construction. The client, together with Scape Venture, fully supported our community engagement.”

Considerate Constructors Scheme Chief Executive Edward Hardy said: “Special congratulations to each award-winning Ultra Site and award-winning supplier who have set the bar of considerate construction to an exceptional level. The National Space Centre Ultra Site is an example of the exceptional standards of performance which can be achieved in a very short period of time when everyone works together.

The innovative efforts of Woodhead’s team and supply chain have truly made a spectacle for the local community and workforce, underlining how the industry can adapt technology to enthuse and promote a positive image of our industry.”

The project was acclaimed as an exemplary and outstanding showcase that demonstrates that project value and duration doesn’t have to be a barrier to Ultra Site status.

The awards come as the next phase of works at the National Space Centre is set to begin, again procured through Scape Venture to maximise project efficiency, speed, and social value.

The next phase of works will include a new mezzanine floor, with exciting education space.

Chas Bishop, Chief Executive of the National Space Centre, said: “The success of the Launch Pad project has enabled a seamless transition to the development of an Extended Reality Laboratory, which will itself unleash the next phase of exciting immersive storytelling and great new exhibition content. The project includes more opportunities to take the local community on our journey and invite the Woodhead team to answer more fierce construction questions from inquisitive GCSE students. They’re not off the hook yet!”

Mark Robinson, Scape Group Chief Executive commented: “Being part of the Scape Venture framework requires strong levels of client and local community collaboration and this accolade demonstrates that Woodhead Group are not only meeting these requirements but exceeding them. We congratulate all who have been involved in the National Scape Centre.”