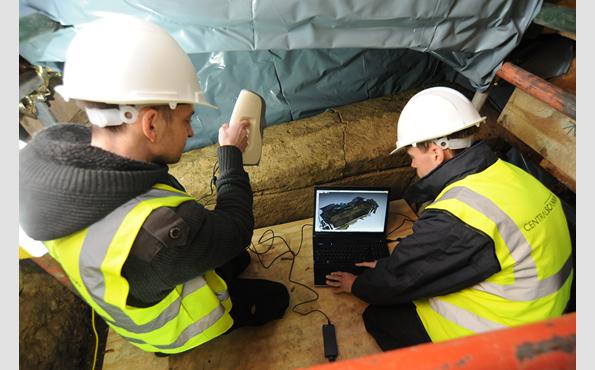 Woodhead Heritage the specialist conservation arm of Robert Woodhead Limited have been working alongside FAS Heritage and Lincolnshire County Council to uncover a significant archaeological discovery.

A team of archaeologists began the excavation early on Thursday 14 November, with the project lasting throughout the day. The sarcophagus was discovered earlier this year during works taking place as part of the Lincoln Castle Revealed project.

“The first step was to take a 3D scan of the coffin itself. Then we carefully opened it up to see what was inside. The body appeared to be wearing leather boots or shoes, which was usual for this period. This would suggest that it was someone of importance. Finding a sarcophagus from this period that’s still undisturbed is extremely rare, so this discovery is of national significance. The next step will be to thoroughly analyse both the sarcophagus and the remains to learn as much as we can from it. This will undoubtedly increase what we know about Saxon Lincoln.”

The stone coffin was found three metres down from today’s ground level in a small area being excavated for the construction of a lift shaft. It appears to have been part of a previously unknown church that is at least 1,000 years old.