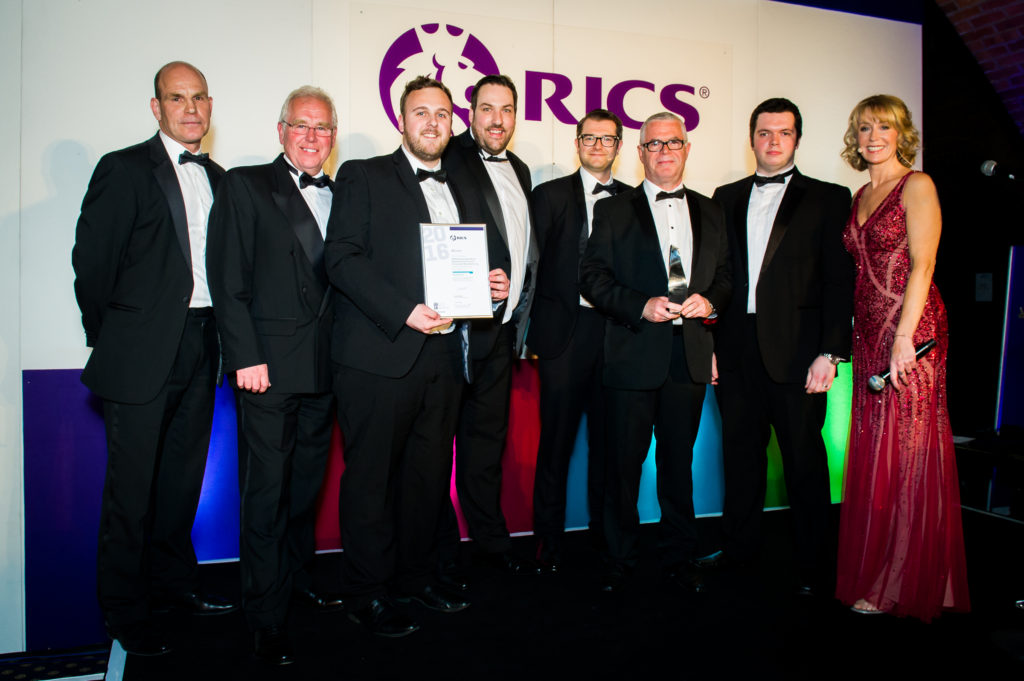 Woodhead Construction is delighted to have secured the Residential Award at this year’s RICS Awards, East Midlands.

Over 350 delegates attended this year’s RICS Awards, East Midlands, held at Kelham Hall in Newark on Thursday 21 April. The awards, established to celebrate the inspirational initiatives across the built environment, bring people together across all sectors to celebrate the region’s most innovative projects.

The award winning project will see Woodhead Living deliver 71 new homes to Bassetlaw over a three year programme, in the first major social housing project in the district for 35 years. New homes will replace the non-traditional airey houses — a pre-fabricated house built in the 1950/60s. The awards was given to Woodhead for phase one of the project, which comprised demolition to allow access to the former playing field and the construction of initially 19, rising to 25, new homes.

Derek McGrath, Customer Engagement Director from Woodhead said: “This is our first RICS award and is a testament to the strong collaboration our Woodhead Living team has developed with A1 Housing and Bassetlaw District Council. This project is not just about delivering highly energy efficient homes for the local community, it’s also about having a positive impact on the lives of the local community through enhance training and employment opportunities and by engaging the local people in the project to help them have a say over what happens within their area.”

Don Spittlehouse, Managing Director at A1 Housing, said: “From the start of this project, A1 Housing and Woodhead have worked hard to design and build modern, energy-efficient and sustainable homes for life. We wanted to provide tenants with homes that exceed basic standards and that would look like a modern housing development, rather than mimic the old council estates of the past.

“To be recognised by the RICS for this project is amazing and fully justifies the hard work, design integrity and ingenuity that A1 Housing and Woodhead have brought to this project. I would like to congratulate everyone who has contributed to this fantastic development.”

Cllr Steve Scotthorne, Cabinet Member for Housing at Bassetlaw District Council, said: “Congratulations to A1 Housing and Woodhead on this latest award. Having seen this project first hand I was extremely impressed not only by the build quality, but the design and preparation that has gone into ensuring that A1 Housing tenants have energy-efficient homes that are adaptable to individual needs.

“This award is testament to high standards and shared ethos of A1 Housing and Woodhead and is full deserved.”