Rare witching bottle may have been found in Newark 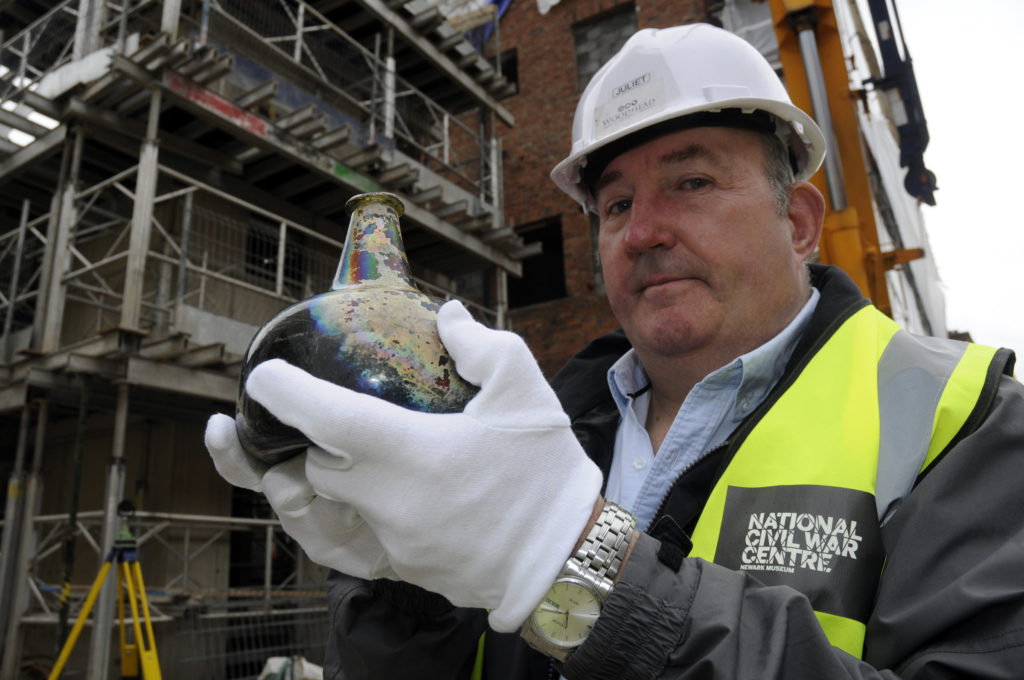 A rare survivor from a time when witches were hunted and superstition was rife has been unearthed in Newark, Nottinghamshire.

Archaeologists have found what is thought to be a “witch bottle” during a dig to pave the way for the £5.4m restoration of the Old Magnus Buildings by Newark and Sherwood District Council and Contractors Woodhead Heritage.

The specialist conservation team of Woodhead, Woodhead Heritage are currently refurbishing the Grade II*structure on Appletongate which will house the UK’s first ever National Civil War Centre when it opens in Spring 2015, backed by £3.5m from the Heritage Lottery Fund.

Found intact, the 15 centimetre tall green glass bottle probably dates to the 1700s. Experts believe it may once have been filled with fingernails, hair and even urine, all contents linking a building with its owner to ward off evil spells cast by witches.

Will Munford from Pre- Archaeological Services Ltd, based in Lincoln, explained:

“Finding this very fragile bottle in one piece supports the idea that it was carefully placed in the ground, possibly near an entrance. Perhaps it was buried during the construction of the Georgian part of the Old Magnus Building, but we can’t be certain. It is the first time we have encountered a suspected witch bottle, but we did find a probable witching shoe – which had a similar purpose – in Worlaby, Lincolnshire. We often forget that people were very superstitious – it was part of their everyday lives. They thought that secreting such personal objects would offer protection from malign forces.”

The British Civil War period saw witch hunting reach a deadly pitch. The activities of the self- proclaimed Witchfinder General, Matthew Hopkins, resulted in the execution of as many as 300 people in Eastern England between 1644-46. Such beliefs persisted long after this period even though the laws against the crime of witchcraft were repealed in 1736.

“We hope to display the bottle when the National Civil War Centre opens next year. It’s a fascinating object and part of the history of Newark. It also tells us a great deal about how people once viewed the world. What is more if it really can ward of evil spells it will be good to have it back!”

The British Civil Wars were fought across England, Scotland, Wales and Ireland from 1638 to 1653. Newark, held by the Royalists, played a major role, undergoing three sieges. The last of these in 1645-46 caused terrible suffering. Amazing new archive material will be used together with state-of-the-art technology and hundreds of previously unseen relics to create a unique museum experience at the National Civil War Centre. The attraction is the first of its kind in the UK and has been backed by £3.5m from the Heritage Lottery Fund, £1.9m Newark and Sherwood District Council and £500,000 from Notts County Council. It will also showcase the area’s wider history and link with another exciting project to unravel the secrets of the Civil War siege works around Newark.