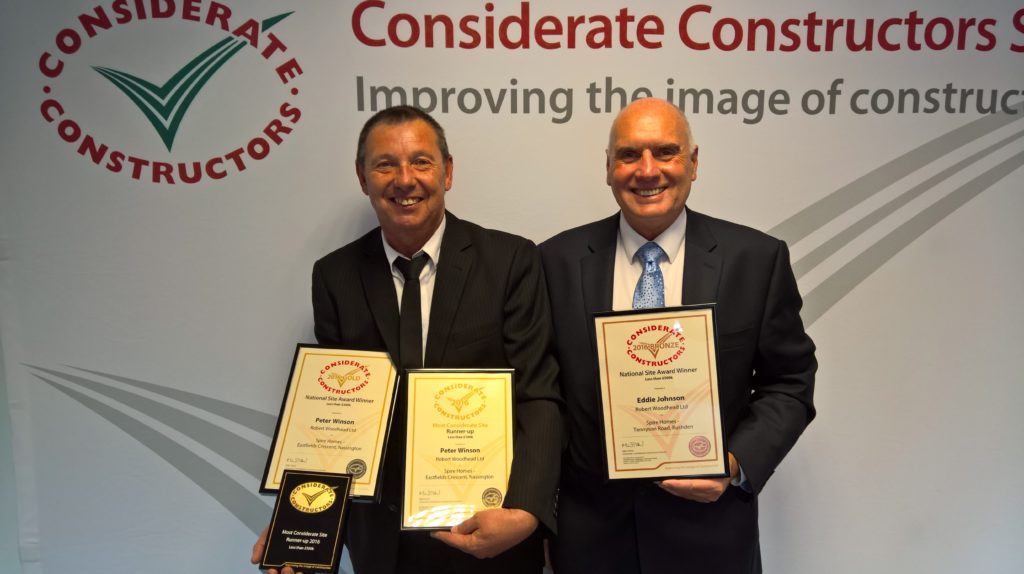 Woodhead Construction is celebrating after a new build housing programme in Northampton received three national awards for considerate construction, taking home a Gold and Bronze as well as coming runner up in the Most Considerate Site award for a project under £500,000.

Eastfields Crescent, a small project to construct a pair of semi-detached houses on a brownfield site in Nassington was awarded a Gold Award and was also runner up in the Most Considerate Site award, putting it in to the top 1% of all sites across the country, an outstanding achievement for a small scale project.

The site, run by Woodhead site manager Pete Winson, scored 43 out of 50 and received praise from the Scheme’s assessors: “Peter clearly cares that both he and Woodhead are seen as part of the community and making a positive contribution to it. Congratulations are due to Peter for his skills and effort on this site and to the Company for providing the necessary back-up.”

The Scheme’s Code of Considerate Practice is used to judge the awards and assesses the performance of sites in five areas – caring about appearance, respecting the community, protecting the environment, securing everyone’s safety and valuing their workforce.

The Scheme’s assessor said of the site: “Respect for the community is exceptional and it is evident that material efforts have been made to engage with the local community and to be a ‘good neighbour’. The way in which Eddie has worked with the local school and how this is being taken forward by the company merits particular mention.”

Simon Dillon, Project Manager for Longhurst Group Ltd. said “These two sites were part of a larger programme to redevelop nine garage sites across East Northamptonshire, for one of our Group Companies, Spire Homes Ltd.

“They were all located within existing residential areas and from our experience of successful working with Robert Woodhead on other projects we knew they would work closely the local community and this was a criterion in their selection as a Considerate Constructor on this project. It is testament to Pete and Eddie’s hard work that they have been recognised in receiving these awards through the Considerate Constructors scheme.”