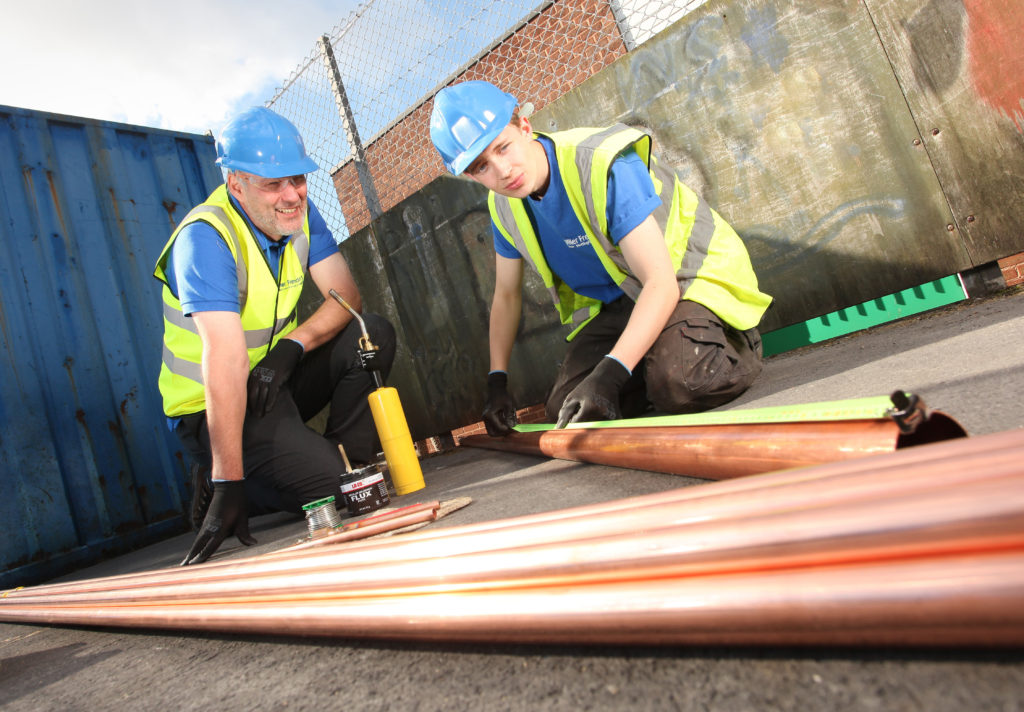 A teenager with his sights set on a career in the construction industry is gaining valuable on the job experience as a heating engineer, thanks to an apprenticeship with Nottingham-based Miller Freeman & Sons, a supply chain partner of Robert Woodhead Limited.

17-year-old Owen Howitt from Wilford, Nottingham has helped to install heating at The Museum of Nottingham Life’s Rock Cottage and is now onsite at Blaby District Council’s new refuse bin collection depot in Leicestershire.  Formally a pupil at West Bridgford School, he is now studying on day release for an NVQ level 2 in plumbing at Basford Hall College and is thrilled to be gaining valuable experience on a range of commercial and industrial sites.

“I’ve been involved in some really interesting work since I started my apprenticeship last year, such as installing pipework for a central heating system at Rock Cottage,” he said.

“At the depot in Leicestershire, I’ve been helping to fit sanitary fittings such as washbasins, toilets and urinals, which has been great to learn,” he said. “I’m really enjoying the opportunity I’ve been given and have already learnt so much during my apprenticeship.”

Owen is an apprentice heating engineer with Nottingham-based Miller Freeman & Sons (Nottingham) Ltd, which has been delivering work through the empa framework sub-contracted by empa partner Robert Woodhead Limited.

Owen, who now hopes to move onto NVQ level 3, would like to work for Miller Freeman permanently once he is trained.  He added: “I enjoy the variety of all the different sites we work on and I’m working on pipework now. I’d like to be taken on when I qualify but I’d also quite like to be self-employed one day.”

“He’s taking on more responsibility as he gains more confidence,” Andy said. “As a small firm it’s good to have support through Woodhead and empa – the supply of work means we’re in a position where we can give opportunities to apprentices such as Owen.”

Caroline Brooks, supply chain co-ordinator at Robert Woodhead based in Edwinstowe, said: “Building great relationships with sub-contractors like Miller Freeman is very important for us to provide the best possible service for our clients.

“Owen’s story is an example of the opportunities which can be created locally with the help of projects delivered via the empa framework. empa is passionate about supporting regional sub-contractors to grow their businesses, creating apprenticeships and jobs which in turn boosts local economies.”

The East Midlands Property Alliance (empa) was formed by local authorities and is managed by Scape Group. It aims to save time and taxpayer money on public sector construction projects.

Find out more about the work of empa at www.em-pa.org.uk  or join the conversation at @empa_ii.