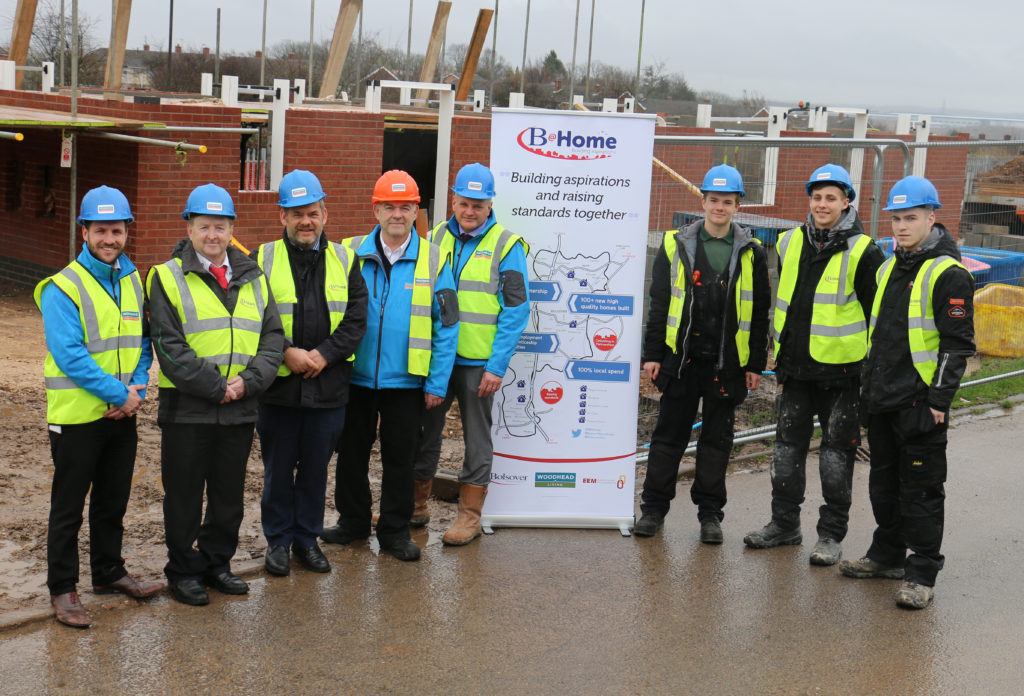 One particular area which is seeing a surge of development in the UK is the construction industry, with the high demand for more housing being a key focus for many city and district councils. One such council, which has recently begun work on building and regenerating its area, is Bolsover District Council.

The B@Home partnership was launched last year between Bolsover District Council and Robert Woodhead Ltd through the Efficiency East Midlands (EEM) Ltd’s New Build Developer Framework to build more than 100 energy efficient homes in the local area in the next four years.

And the initiative is very much about developing partnerships and delivering growth – not just to people needing to rent council properties, but also to construction apprentices who are gaining new skills, learning how to manage real-life situations on site and working together with all contractors on the B@Home development sites.

Vision Apprentices, the apprenticeship arm of West Nottinghamshire College, is currently watching three of its apprentices develop carrying out maintenance work for Bolsover District Council, and making the most of the opportunity to learn additional skills on the new build properties on the Fir Close development in Shirebrook, an area of derelict land, which will soon contain six two-bedroom houses and two one-bedroomed flats.

Eighteen-year-old Jake, who lives in Alfreton, joined the council two years ago as a plumbing apprentice. He attends West Nottinghamshire College’s construction campus one day a week.

“It’s great to be working on this kind of project. I’m learning lots of things I’ve never done before and it’s boosting my skills. On site you experience new levels of responsibility. I get my theory and some practical studies at college and then get to put it into real practice on site.

“As an apprentice you get great hands-on experience and a head start into a career. I would really like to apply for a full-time job here at the council after qualifying.”

All three apprentices are ready to get stuck in to the Fir Close development, after all having applied their trades at another B@Home site in Blackwell recently. Next week they will all work on ‘first fixing’ the new builds.

David Pearson is Woodhead’s project manager for the B@Home partnerhsip. He said:

“Working with apprentices isn’t a new concept for Woodhead. Part of the reason we won the tender was based on the employment opportunities we can offer local apprentices, not just because we can deliver the building works.

“We’re proud to support our local communities and often work with local schools and colleges to provide work experience opportunities, and always aim to use local suppliers and contractors for materials and services.”

“I’m really looking forward to doing all the first and second fixing for an entire house. It’s quite daunting to see a real-life site but also very exciting. I’m finding it interesting working with others on site. I’ll admit, I feel a lot slower than those who’ve worked in their trades for years, but I’ll get there! To still be able to study and be in paid work is amazing.”

“It’s a privilege to be part of this project with Woodheads and West Notts – long may it continue. Working with Woodheads is very reassuring as they have a good social conscience for working in partnerships and that’s been reflected in the award they won last week – the Building Communities award.

“As a local authority we have a genuine and heartfelt commitment to take on apprentices and we have already agreed the key stages of construction where we know the apprentices are scheduled to come onto site. Tyler will be soon be involved in the installation of first floor joists, roof construction then internal studded walls and staircases.

“This new build experience isn’t something we can normally offer apprentices as they’re usually involved in maintaining our council houses. This is a fantastic chance to test their skills in brand new homes.

“Fir Close is due to be complete in August and then we can offer them further work on further new build sites across the District. They’re doing brilliantly so far, so we have every confidence in their flourishing skills.”

Tyler Griffiths, 17, from Glapwell agrees that his skills are improving. He said:

“Life working on site is definitely different. I learn so much about it at college but that’s under test conditions – this is the real thing. Working alongside other people is great and is improving my communication skills.”