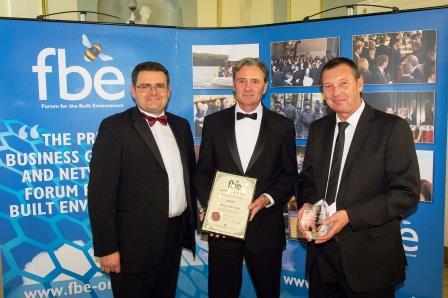 We are delighted to announce that on the 10th October 2013 the Heritage Skills Centre picked up another award at the East Midlands Regional fbe (Forum for the Built Environment)Annual Awards Dinner.

The fbe Award for the best scheme and team in Lincolnshire celebrates all the partners who work collaboratively to deliver an exceptional project including  Architects, Consultants, Engineers and Contractors.

Peter Winson, Heritage Skills Centre Site Manager commented on the award “It’s absolutely brilliant that the project is getting such widespread industry recognition. It was a challenging build in a difficult location, the first new build within the grounds of Lincoln Castle in over 100 years.  This award is a credit to everyone involved in the project.”

The Heritage Skills Centre is also up for more awards later in the year at the LABC National Awards and the SCALA Awards for the Civic Building of the year. Highfield House another project completed by Robert Woodhead’s sustainable arm Woodhead Living was also shortlisted for  the Nottinghamshire scheme and team however was unsuccessful.